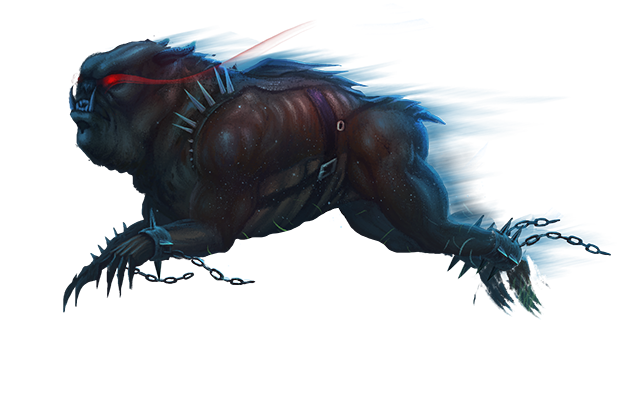 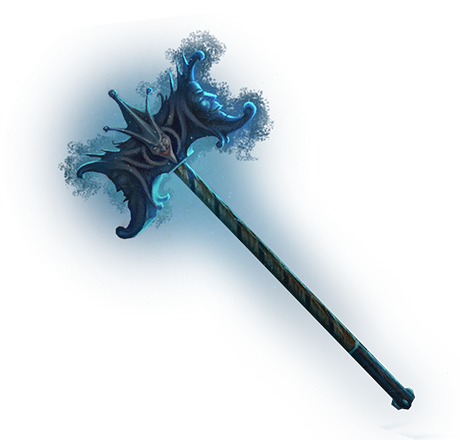 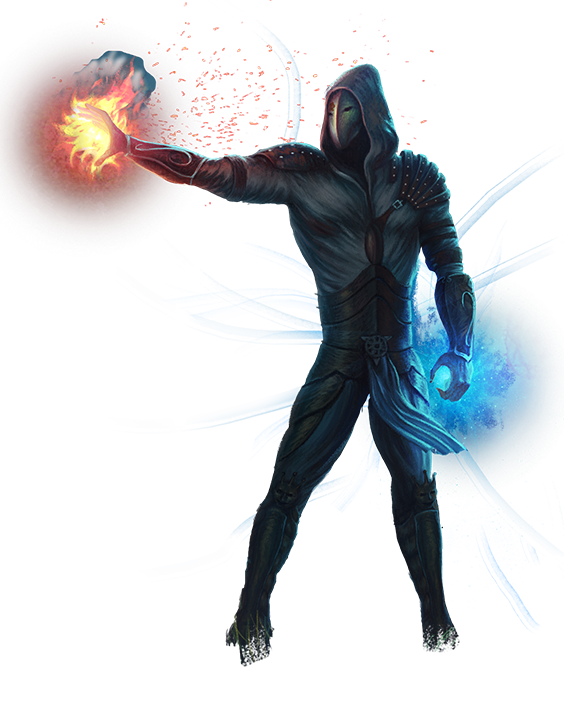 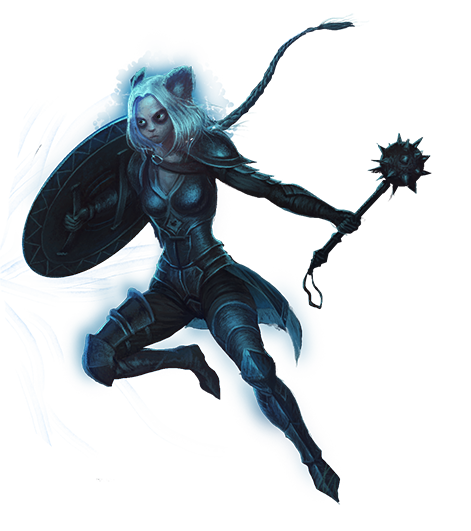 Jinx: Womb of Cosmos is a single player, story driven, epic, gothic fantasy, RPG that takes place in the macabre world of Amelor. Follow the journeys of a mysterious, masked etherweaver, his honourable beastwoman protector and a romantic... vegetarian... bulldog. Embark on a heroic mission not to save the world but to reshape your destiny. Among other, possibly shady, things.

An intricate but accessible crafting system with which you find, repair, upgrade and combine items to outfit your party with the best tools they can have to face the dangers ahead.

Select your strategy on a wide variety of encounters, with turn based combat that gets more challenging as you garner experience and hone your powers.

Explore a complex world and take in its sights, from idyllic meadows to dark, macabre lands, while gathering lore, uncovering ancient secrets and discovering lost treasures. 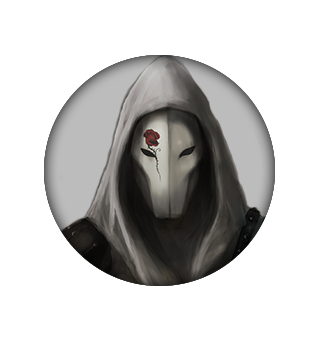 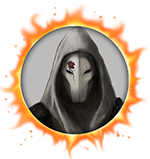 Foredoomed, wordless owner of Castle Sin and loath wielder of Jester's Laugh. A master of Elemental forces tormented by aeons of perpetual solitude and hounded by ghastly visions of the past. 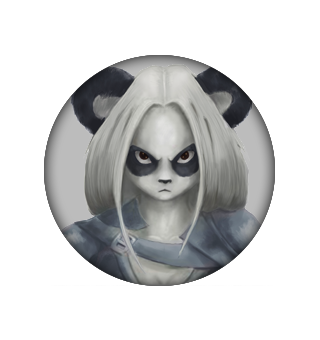 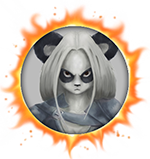 Honorable, loyal Shield of Zhaal and unyielding bodyguard of the master of eldritch mysteries. Dedicated seeker of the shield of ancient legends and resolute, persevering soul with a dark past weighted with mortal failure. 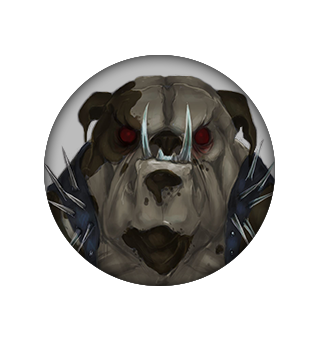 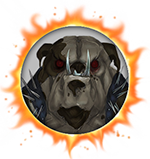 Bungling, poetaster, cantankerous bulldog. Loud, tamperamental beast of a companion, with a crush for the most unlikely subject. Possessing a whole-body arsenal of carefully selected instruments of delicate pain and intense savagery. Vegetarian.

The Valley of Hearts bears its somewhat ironic name not without some relevance, for it is a land that carries a glorious past, or so the myths and legends suggest. Did it really bear such importance that its ancient structures of marvellous architecture and enigmatic purpose seem to suggest?

Whatever its ancient past, its recent one is morbid, its present is dismal and its future is bleak. A place of outcasts, forced to a life of constant fighting for survival, a land sundered by ancient curses and past mistakes, a territory full of dreadful and sobering places, hiding treacherous traps, dangerous secrets, and the kind of unstable, audacious men that seek those out.

Travellers are advised to avoid the most interesting areas, and those that intend to investigate or explore them are met with stories of the countless that have been lost. Stories about the animate dead of the Cemetery of the Unfaithful, or the savage beasts, venomous critters and poisonous plants of the Forest of the First Omen, or the diseased half-men of the plague-infested catacombs. Those brave - or foolhardy - men that choose to venture there anyway often find more truth in the fables than most would expect, and the few lucky ones that survive add their own conflicts with formidable creatures or unknowable horrors to those tales.

But there is also beauty in the Valley, for those that know how to see it. In the skyline of the Outer Rims during a sunset, in the morning mist and the sunlight shimmering of the Lake of Lovers, or even on a peaceful morning on a clear road devoid of bandits, people that have found themselves here occasionally take a moment to smell the flowers.

And then, there are those places that no one knows what to make of. Places ancient and unapproachable, or unbreachable, or inhabited by entities so old and so powerful that no one has managed to explore yet. Those places are shrouded in mystery and wrapped further with rumor after rumor, whispered fact after whispered fact, until they are so thoroughly entrenched in folklore that no one dares approach.

No one can truly discern the true nature of this ancient citadel. Prison or sanctuary, watchtower or fort, a reservoir of ancient knowledge or something even stranger, with functions that are no longer understood or even relevant, scholars have a lot of theories for the place, each with its own supportive arguments, facts, evidence and statements.

No one has dared to climb the cliffs it sits upon and scale its walls in recent memory, for everyone knows that it is cursed, and its imprisoned denizens are creatures of darkness, hungry for souls and powerful beyond compare. The scholars do not consider an expedition that risks their souls to be worth it - they have their own evidence to support their theories already. Adventurers and explorers rarely wish to face the risks - everyone knows there is no treasure in there. Bandits have no desire to face hideous guardians and life-threatening traps - there are much better places to settle only nearby.
All in all, no one approaches Castle Sin's gates, and everyone is happy that nothing comes out of it.

But something does lurk in the castle. Something that remembers the days of faith and power, the days where it was a seat of authority to those that would turn an unblinking gaze to the whole Valley. A citadel indeed; a cathedral of lost faith, a sanctuary of solitude, a prison of necessity. All of those and more, it is. Vast, dark, dusty and mostly uninhabited, save for its current master and spectral or weirder servants, locked in their rooms, locked in their own selves, each waiting for release.

Waiting, but not wishing. Everyone in there knows that wishes may come true...
...no one wants that.

Nowhere in Ellevar is entirely safe; bandits are not uncommon, and beasts occasionally lurk near unpatrolled roads. Those that carry anything of value know well enough to have guards along, or travel in caravans that have their own defenders.

In the Valley of Hearts, however, safety is a concept lost, and likely forgotten. Bandits do not stalk the roads, they rule them. Beasts do not lurk in the shadows, waiting for a lone victim; they hunt the unwary for food or sport. In the Valley, the only hint of relative calm lies in those few towns and villages that manage to survive long enough to train the majority of their population to use weapons, and setting on the road unescorted is suicidal.

But there are worse things than brigands and raiders in the Valley. There are those that do not scheme and fight for food or easy wealth or preservation of the kind of life afforded to criminals. There are those that plan with intent, with motives of conquest, or destruction, or truly vile deeds. There are those that serve entities greater than man or beast, malevolent creatures that thrive in darkness and blood, with no morality to check their actions and no perception of mortality to give them pause.

But most people cannot conceive the gloom and horror that lies beyond the roads and villages. Others choose to wilfully ignore such, because minds, lives and souls are fragile. Some of them may even avoid such ominous encounters for their whole lives. A rare few, however, are destined for confrontation; they are the ones that sinister entities seek, the ones that purposeful men hunt. They are the ones that even gods stare at.